(a) A device that is used to break an electric circuit is called a switch.

(b) An electric cell has two terminals.

2. Mark ‘True’ or ‘False’ for the following statements:
(a) Electric current can flow through metals.
True
(b) Instead of metal wires, a jute string can be used to make a circuit.
False
(c) Electric current can pass through a sheet of thermocol.
False
3. Explain why the bulb would not glow in the arrangement shown in Fig. 12.13. 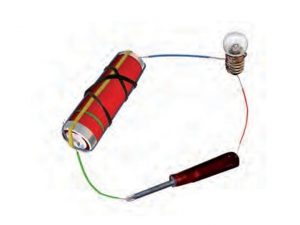 The bulb would not glow in the arrangement shown in Fig. 12.13. because one end of the tester is made of plastic which is an insulator. It does not allow the electricity to pass through it.

4. Complete the drawing shown in Fig 12.14 to indicate where the free ends of the two wires should be joined to make the bulb glow. 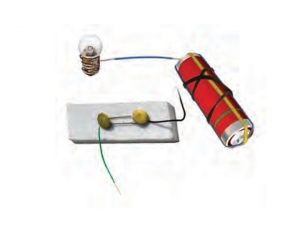 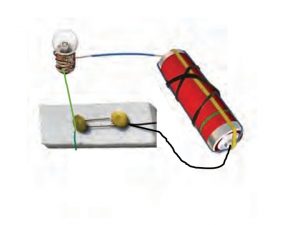 5. What is the purpose of using an electric switch? Name some electrical gadgets that have switches built into them.
A switch is a simple device that either breaks the circuit or completes it. So with the help of electric switch, we can ‘on’ or ‘off’ the electric devices as per our need. Electric iron, AC, TV are some gadgets that have switches built into them. 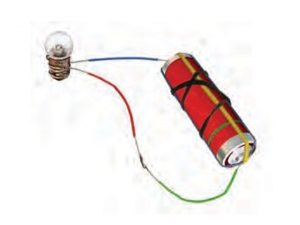 9. Why should an electrician use rubber gloves while repairing an electric switch at your home? Explain.
Our body is a good conductor of electricity. During the repairing of an electric device if our body comes in contact with the electric current then it would be fatal. Rubber is an insulator. Therefore, we can avoid electric shocks by wearing rubber gloves.

i). An electric cell produces electricity from the chemicals stored inside it.

iii). The bulb glows only when current flows through the circuit.

iv). An electric bulb has a filament that is connected to its terminals.

v). The human body is a conductor of electricity.

3). Answer the following.
i). What is an open circuit?
In an electric circuit if the contact at any point is broken then it is called an open circuit.
ii). Define electric switch.
A switch is a simple device that either breaks the circuit or completes it.
iii). Name the devices that use electric cells.
Electric cell are also used in alarm clocks, wristwatches, transistor radios, cameras and many other devices.
v). What is the flow of direction of electric current?
The electric current flows in a direction from the positive terminal to the negative terminal.
vi). What are conductors of electricity?
Materials that allow an electric current to pass through them are conductors of electricity.
vii). Write two advantages of dry cell.
i). It converts chemical energy to electric energy
ii). It is easy to carry.

Distinguish between
i). conductors and insulators.

16). Garbage In Garbage Out

10). Motion and the Measurement of Distances

9). The Living Organisms – Characteristics and Habitats

7). Getting to Know Plants