1). Fill in the blanks in the following.

(i) Artificial magnets are made in different shapes such as bar magnet, disc magnet and horse-shoe magnet.

(ii) The Materials which are attracted towards a magnet are called magnetic materials.

(iii) Paper is not a magnetic material.

(iv) In the olden days, sailors used to find direction by suspending a piece of bar magnets.

2). State whether the following statements are true or false:

(i) A cylindrical magnet has only one pole.

(iii) Similar poles of a magnet repel each other.

(iv) Maximum iron filings stick in the middle of a bar magnet when it is brought near them.

(vi) A compass can be used to find East-West direction at any place.

(vii) Rubber is a magnetic material.

3). It was observed that a pencil sharpener gets attracted by both the poles of a magnet although its body is made of plastic. Name a material that might have been used to make some part of it.

Iron is used to make some parts of the sharpener.

4). Column I shows different positions in which one pole of a magnet is placed near that of the other. Column II indicates the resulting action between them for each situation. Fill in the blanks. 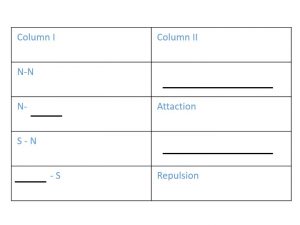 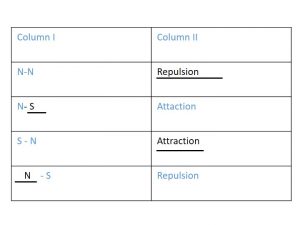 5). Write any two properties of a magnet.

The properties of magnets are as follows.

i). Two poles always exists in a magnet.

iii). Like poles repel each other and unlike poles attract each other.

6). Where are poles of a bar magnet located?

The poles of a bar magnet located at the ends of the magnet.

7). A bar magnet has no markings to indicate its poles. How would you find out near which end is its north pole located?

Suspend the magnet freely with a thread and allow it to come to the rest. The end of the bar magnet pointing towards the north direction is the north pole.

8). You are given an iron strip. How will you make it into a magnet?

There are several methods of making magnets. Let us learn the simplest one.

i). Take a rectangular piece of iron. Place it on the table.

ii). Now take a bar magnet and place one of its poles near one edge

of the bar of iron.

iii) Without lifting the bar magnet, move it along the length of the iron bar till you reach the other end.

iv). Now, lift the magnet and bring the pole (the same pole you started with) to the same point of the iron bar from which you began.

v). Move the magnet again along the iron bar in the same

direction as you did before. Repeat this process about 30-40 times.

vi) Bring a pin or some iron filings near the iron bar to check whether it has become a magnet.

vii). If not, continue the process for some more time.

viii). Remember that the pole of the magnet and the direction of its

movement should not change.

9). How is a compass used to find directions?

A compass is usually a small box with a glass cover on it. A magnetized needle is pivoted inside the box, which can rotate freely. The compass also has a dial with directions marked on it. The compass is kept at the place where we wish to know the directions. Its needle indicates the north-south direction when it comes to rest. The compass is then rotated until the north and south marked on the dial are at the two ends of the needle. To identify the north-pole of the magnetic needle, it is usually painted in a different colour.

10). A magnet was brought from different directions towards a toy boat that has been floating in water in a tub. Affect observed in each case is stated in Column I. Possible reasons for the observed affects are mentioned in Column II. Match the statements given in Column I with those in Column II.

1). Write whether True or False:

ii). Magnetite is a natural magnet.

iii). Some people believe that magnetite was first discovered at a place called Asia.

v). All the magnets have two poles whatever may be their shape.

vi). The end of the magnet that points towards the North is called its north pole.

vii). Two poles of a magnet can be separated.

viii). Travellers have been making use of this property of magnets to find directions.

ii).  Some people believe that magnetite was first discovered at a place called Magnesia.

iv). Travelers have been making use of this property of magnets to find directions.

v). Magnets lose their properties if they are heated.

i). Where the magnetite was first discovered according to some people?

Some people believe that magnetite was first discovered at a place called Magnesia.

ii). What are magnets?

The substances having the property of attracting iron are known as magnets.

iii). What are artificial magnets?

Magnets made from pieces of iron are known as artificial magnets.

v). What are the magnetic materials?

Materials that are attracted to magnets are called magnetic materials.

vi). Name the poles of magnets?

A magnet has two poles: the north pole and the south pole.

i). It converts chemical energy to electric energy

1). Thin wire in the electric bulb.

2). Two terminals of the electric cell.

5). Classify the following as conductors and insulators.

i). conductors and insulators.

16). Garbage In Garbage Out

10). Motion and the Measurement of Distances

9). The Living Organisms – Characteristics and Habitats

7). Getting to Know Plants