(a) The main steps of nutrition in humans are ingestion, digestion, absorption, assimilation and egestion.

(b) The largest gland in the human body is the liver.

(c) The stomach releases hydrochloric acid and digestive juices which act on food.

(d) The inner wall of the small intestine has many finger-like outgrowths called villi.

(e) Amoeba digests its food in the food vacuole.

(a) Digestion of starch starts in the stomach. (T/F)

(b) The tongue helps in mixing food with saliva. (T/F)

(d) The ruminants bring back swallowed grass into their mouth and chew it for some time. (T/F)

3). Tick (√) mark the correct answer in each of the following:

(a) Fat is completely digested in the

(b) Water from the undigested food is absorbed mainly in the

4). Match the items of Column I with those given in Column II:

5). What are villi? What is their location and function?

The inner walls of the small intestine have thousands of finger-like outgrowths. These are called villi.

Location: inner walls of the intestine.

Function: The villi increase the surface area for absorption of the digested food.

6). Where is the bile produced? Which component of the food does it help to digest?

Bile is produced in the liver. The bile plays an important role in the digestion of fats.

7). Name the type of carbohydrate that can be digested by ruminants but not by humans. Give the reason also.

Cellulose is the carbohydrate that can be digested by ruminants but not by humans. Ruminants have a large sac-like structure called Caecum between the oesophagus and the small intestine. The cellulose of the food is digested here by the action of certain bacteria which are not present in humans.

8). Why do we get instant energy from glucose?

Glucose can easily breakdown easily in the cell with the help of oxygen and gives carbon dioxide, water and energy.

9). Which part of the digestive canal is involved in:

(i) absorption of food small intestine.

10). Write one similarity and one difference between the nutrition in amoeba and human beings.

11). Match the items of Column I with suitable items in Column II 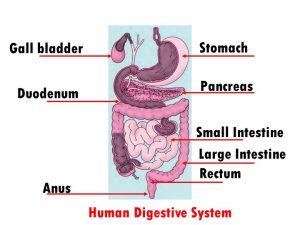 1). The food components gradually get digested as food travels through the various compartments.

2). Our teeth vary in appearance and perform different functions.

4). The liver increases the surface area for absorption of the digested food.

5). The large intestine is wider and shorter than the small intestine.

6). The basic process of digestion of food and release of energy is different in all animals.

Fill in the blanks

1). Plants can prepare their own food by the process of photosynthesis.

2). Bees suck the nectar of the plants.

3). The swallowed food passes into the food pipe or oesophagus.

5). The grass is rich in cellulose, a type of carbohydrate.

6). The small intestine is highly coiled and is about 7.5 metres long.

1). Write the names of the components of the alimentary canal.

The alimentary canal can be divided into various compartments:

(5) large intestine ending in the rectum and

2). What is the function of the saliva?

The saliva breaks down the starch into sugars.

3). Write the functions of the tongue?

We use our tongue for talking. Besides, it mixes saliva with the food during chewing and helps in swallowing food. We also taste food with our tongues.

4). Name the components of the alimentary canal?

The components of the alimentary canal are the buccal cavity, oesophagus, stomach, small intestine, large intestine and the anus.

The two sets of teeth are milk teeth and permanent teeth.

6). Write the names of different types of teeth.

The different types of teeth are molar, premolar, canine and incisor.

The breakdown of complex components of food into simple substances is called digestion.

The process of taking the food into the body is called ingestion.

The digested food passes into the blood vessels in the wall of the intestine. This process is called absorption.

The removal of the faecal matter through the anus from time to time is called egestion.

Label the diagram of the digestive system in Amoeba. 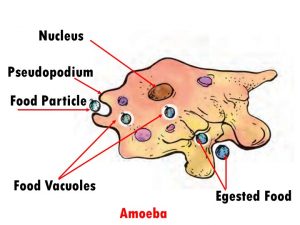