1). Why does an athlete breathe faster and deeper than usual after finishing the race?

Ans: An athlete needs more energy during and after the race. As the demand of energy is high, it needs more supply of oxygen. Therefore to fulfil the demand of oxygen an athlete breaths fast and also take deep breathes to inhale more oxygen.

2). List the similarities and differences between aerobic and anaerobic respiration.

i). Both the types of respiration includes breakdown of glucose.

ii). Both takes place in the cell.

3). Why do we often sneeze when we inhale a lot of dust-laden air?

Ans: The air around us has various types of unwanted particles, such as smoke, dust, pollens, etc. When we inhale, the particles get trapped in the hair present in our nasal cavity. However, sometimes these particles may get past the hair in the nasal cavity. This may irritate the lining of the cavity, as a result of which we sneeze. Sneezing expels these foreign particles from the inhaled air and a dust-free, clean air enters our body.

4). Take three test-tubes. Fill ¾th of each with water. Label them A, B and C. Keep a snail in test-tube A, a water plant in test-tube B and in C, keep snail and plant both. Which test-tube would have the highest concentration of CO2?

Ans: i). In the test-tube A: CO2 is produced by the respiration of snail and there is no consumption of CO2.

ii). In the test-tube B: CO2 is produced by the respiration of the plant and large part of it is consumed by the plant during photosynthesis.

iii). In the test-tube C: CO2 is produced by the respiration of snail and the plant and a large part of it is consumed by the plant during photosynthesis.

Therefore, test-tube A has highest concentration of CO2.

(a) In cockroaches, air enters the body through

(b) During heavy exercise, we get cramps in the legs due to the accumulation of

person at rest is:

(d) During exhalation, the ribs

(i) During heavy exercise the breathing rate of a person slows down. (T/F)

(ii) Plants carry out photosynthesis only during the day and respiration only at night. (T/F)

(iii) Frogs breathe through their skins as well as their lungs. (T/F)

(iv) The fishes have lungs for respiration. (T/F)

(v) The size of the chest cavity increases during inhalation. (T/F)

8). Given below is a square of letters in which are hidden different words related to respiration in organisms. These words may be present in any direction— upwards, downwards, or along the diagonals. Find the words for your respiratory system. Clues about those words are given below the square.

(i) The air tubes of insects

(iv) Tiny pores on the surface of leaf

(vii) The openings through which we inhale

(ix) An organism with tracheal system 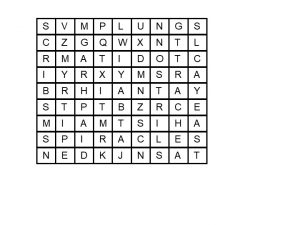 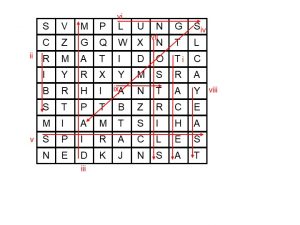 9). The mountaineers carry oxygen there is no air.

(b) The amount of air available to a person is less than that available on the ground.

(c) The temperature of air is higher than that on the ground.

(d) The pressure of air is higher than that on the ground.

Ans: The amount of air available to a person is less than that available on the ground.

Fill in the blanks.

i). Breathing is a part of respiration.

ii). The food has stored energy which is released during respiration.

iii). On average, an adult human being at rest breathes in and out 15–18 times in a minute.

iv). Insects have a network of air tubes called tracheae for gas exchange.

v). Earthworms breathe through their skins.

Write whether True or False.

i). Breathing is a part of respiration.

ii). All organisms are made up of small microscopic units called cells.

iv). A breathe means one inhalation plus one exhalation.

v). During inhalation, ribs move down and inwards.

Answer the following in one sentence each.

1). What is cellular respiration?

2). What is inhalation and exhalation?

3). What do you mean by breathing rate?

Ans: The number of times a person breathes in a minute is termed as the breathing rate.

4). Why do all animals respire?

Ans: All living organisms respire to get energy from the reserve food in the form of glucose.

5). Name the types of respiration?

7). What are the respiratory organs in insects?

Ans: The process of breakdown of food in the cell with the release of energy is called cellular respiration.

Ans: The breakdown of glucose in the presence of oxygen is called aerobic respiration.

Ans: The breakdown of food without using oxygen is called anaerobic respiration.

Ans: The organisms that survive in the absence of oxygen are known as anaerobes.

1). Yeast are used to make wine and beer.

Ans: Yeasts are single-celled organisms. They respire anaerobically and during this process yield alcohol. They are, therefore, used to make wine and beer.

2). We get relief from cramps after a hot water bath or a massage.

3). why do we feel hungry after a physical activity.

Ans: Whenever a person needs extra energy, he/she breathes faster. As a result more oxygen is supplied to our cells. It speeds up the breakdown of food and more energy is released. Due to this, we feel hungry after a physical activity.

Write a short note on.

Ans: Earthworms breathe through their skins. The skin of an earthworm feels moist and slimy on touching. Gases can easily pass through them.

7). Weather, Climate and Adaptations of Animals to Climate

11). Transportation in Animals and Plants

14). Electric Currents and its Effects