1). Why do organisms take food?

2). Distinguish between a parasite and a saprotroph.

3). How would you test the presence of starch in leaves?

The presence of starch in leaves can be tested by the Iodine test.

4). Give a brief description of the process of synthesis of food in green plants.

During photosynthesis, chlorophyll-containing cells of leaves (Fig. 1.2), in the presence of sunlight, use carbon dioxide and water to synthesize carbohydrates. The process can be represented in an equation: 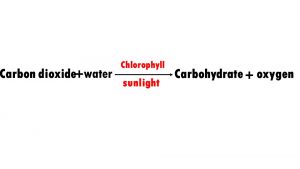 5). Show with the help of a sketch that plants are the ultimate source of food.

(a) Green plants are called autotrophs since they synthesize their own food.

(b) The food synthesized by plants is stored as starch.

(c) In photosynthesis solar energy is absorbed by the pigment called chlorophyll.

(i) A parasitic plant with yellow, slender and branched stem.

(ii) A plant that is partially autotrophic.

(iii) The pores through which leaves exchange gases.

(a) Cuscuta is an example of:

(b) The plant which traps and feeds on insects is:

(i) Carbon dioxide is released during photosynthesis. (T/F)

(ii) Plants which synthesize their food are called saprotrophs. (T/F)

(iii) The product of photosynthesis is not a protein. (T/F)

11). Choose the correct option from the following:

Which part of the plant takes in carbon dioxide from the air for photosynthesis?

12). Choose the correct option from the following:

Plants take carbon dioxide from the atmosphere mainly through their:

2). Humans can synthesise food for themselves.

3). Sun is the ultimate source of energy for all living organisms.

4). During photosynthesis, carbon dioxide is released.

5). Starch is also a carbohydrate.

6). The leaves other than green also have chlorophyll

7). Algae can also prepare their own food by photosynthesis.

9). There are few plants which can trap insects and digest them.

Fill in the blanks

2). Leaves are the food factories of plants.

3). During photosynthesis, oxygen is released.

4). Carbohydrates are made up of carbon, hydrogen and oxygen.

The components of food like carbohydrates, fats, proteins, vitamins and minerals are called as nutrients.

2). What things are necessary to carry out the process of photosynthesis?

Chlorophyll, sunlight, carbon dioxide and water are necessary to carry out the process of photosynthesis.

Nutrition is the mode of taking food by an organism and its utilization by the body.

The mode of nutrition in which organisms make food themselves from simple substances is called autotrophic nutrition.

The mode of nutrition in which organisms depend upon other plants and animals for food is called heterotrophic nutrition.

The mode of nutrition in which organisms take in nutrients from dead and decaying matter is called saprotropic nutrition.

Some organisms live together and share both shelter and nutrients. This relationship is called symbiosis.

2). In the absence of photosynthesis, life would be impossible on the earth.

3). The sun is the ultimate source of energy for all living organisms.

The solar energy is captured by the leaves and stored in the plant in the form of food. Thus, sun in the ultimate source of energy for all living organisms.