Tick the most suitable answer in questions 1 and 2.

1). In addition to the rock particles, the soil contains

(i) air and water

2). The water holding capacity is the highest in

(iv) mixture of sand and loam

4). Explain how soil is formed.

Ans: Soil is formed by the breaking down of rocks by the action of wind, water and climate. This process is called weathering. The nature of any soil depends upon the rocks from which it has been formed and the type of vegetation that grows in it.

5). How is clayey soil useful for crops?

Ans: Clayey soil is useful for crops because of the following features-

(i) Water holding capacity is high in clayey soil

(iii) It is fertile in nature.

6). List the differences between clayey soil and sandy soil.

7). Sketch the cross-section of soil and label the various layers.

9). Explain how soil pollution and soil erosion could be prevented.

(i). Ban on polythene bags.

(ii). Waste products and chemicals should be treated before they are released into the soil.

(iii). The use of pesticides should be minimised.

(iii). Efforts should be made to increase the green areas.

10). Solve the following crossword puzzle with the clues given:

5). Use should be banned to avoid soil pollution.

7). Living organisms in the soil. 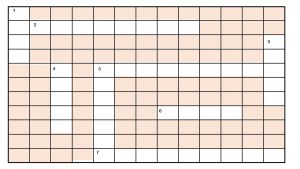 1). In the desert soil erosion occurs through.

4). This type of soil can hold very little water.

5). Collective name for layers of soil. 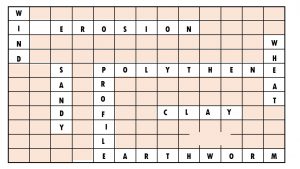 Fill in the blanks.

i). Soil is essential for agriculture.

iii). The layers of soil are referred to as horizons.

iv). The best topsoil for growing plants is loam.

vi).  Silt occurs as a deposit in riverbeds.

vii). Soil is formed by weathering of rocks.

Write whether True or False.

i). Agriculture provides food, clothing and shelter for all.

ii). The use of pesticides should be minimised.

iii). The uppermost horizon is rich in minerals.

iv). The second horizon of soil is rich in humus.

v). The size of the particles in a soil has an influence on its properties.

vii). Loam occurs as a deposits in riverbeds.

viii). Clayey soil is used to make toys and pots.

Answer the following in one sentence each.

Ans: The rotting dead matter in the soil is called humus.

Ans: A vertical section through different layers of the soil is called the soil profile.

Ans: The mixture of rock particles and humus is called soil.

4). What are the factors that influence soil formation?

Ans: The removal of land surface by water, wind or ice is known as soil erosion.

6). Which horizon of the soil is most suitable for growth of plants?

Ans: The uppermost layer of soil A-horizon is most suitable for growth of plants.

Ans: Sandy soil is used for construction of buildings along with

Write a short note on

Ans: Each layer differs in feel (texture), colour, depth and chemical composition. These layers are referred to as horizons.

The uppermost horizon is generally dark in colour as it is rich in humus and minerals. The humus makes the soil fertile and provides nutrients to growing plants. This layer is generally soft, porous and can retain more water. It is called the topsoil or the A-horizon. This provides shelter for many living organisms such as worms, rodents, moles and beetles. The roots of small plants are embedded entirely in the topsoil.

Ans: The second layer of soil has a lesser amount of humus but more of minerals. This layer is generally harder and more compact and is called the B-horizon or the middle layer.

Ans: The third layer is the C-horizon, which is made up of small lumps of rocks with cracks and crevices below this layer is the bedrock, which is hard and difficult to dig with a spade.

4). Write the classification of soil?

Ans: Wheat crops are grown in clayey soils because they are rich in humus and very fertile.

Label the different layers of soil. 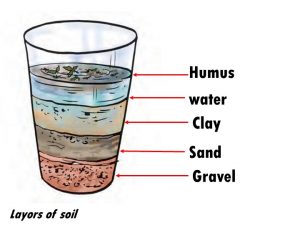 7). Weather, Climate and Adaptations of Animals to Climate

11). Transportation in Animals and Plants

14). Electric Currents and its Effects